The Automotive use case is focused on the motor and gearbox assembly produced by STELLANTIS. There are three main operations involved:

For the first operation, a COMAU AURA high payload collaborative robot is selected to safely pick and place the motor on a conveyor using a custom reconfigurable motor gripper. Also, the AURA robot, is responsible for transporting a gearbox in the proximity of the motor using a custom gearbox gripper. At that point, a human operator manually guides the AURA robot, so that the gearbox aligns with the motor and performs the assembly of these two main parts.

During the third operation, the COMAU mobile robot performs the quality inspection and in the case of any support/confirmation needed a human operator is allocated to support the inspection tasks. Based on the definition of the automotive pilot line, the Automotive pilot layout has been consolidated in order to facilitate the three main operations involved in this pilot. 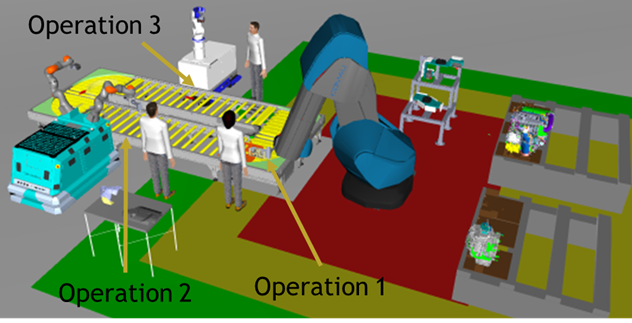 Get the latest news on ODIN right to your inbox!

Newsletter Permission: The ODIN project will use the information you provide in this form to be in touch with you and to provide updates and news. Please let us know if you would like to hear from us:
ODIN newsletter: You can change your mind at any time by contacting us at info@odinh2020.eu. We will not distribute your email address to any party at any time.